Hooligan Sparrow is a critical journey through several fundamental human rights issues in China, such as freedom of expression, the right to assembly, safety and security, freedom of movement, personal privacy from surveillance, the rights of the child, and women’s human rights. Of these the most urgent is due process because several activists who appear in our film are now political prisoners.

Although there is no one international definition of what constitutes a “political prisoner,” it’s a term that is usually defines persons imprisoned for their political activities or their criticism and opposition to their countries. In China, people are detained for expression, journalism, research, publishing, advocacy, human rights activism, and defending legal abuses by the state.

While China has signed many international human rights covenants and treaties, they are violating many due process issues such as forced disappearances, illegal detainment, unlawful interrogation, the right to counsel and a fair trial, torture and cruel and inhuman punishment, length of incarceration and the death penalty.

All of the activists in our film, including Hooligan Sparrow, have been detained at one time or another. The lawyer Wang Yu, one of the courageous activists in the film, is currently in prison for defending human rights. She was swept up with dozens of human rights lawyers in China in the summer of 2015. Her case is typical of the current situation in China for human rights workers, she is being held in an undisclosed prison, there have been no charges filed or notification of an upcoming trial. Her husband (another human rights lawyer) is also in prison. Their teenage son, who was scheduled to study in Australia, tried to escape and was kidnapped inside of Burma by Chinese security forces and forcibly brought back to Beijing where he is currently under house arrest.

How You Can Help

In the fall of 2015, director Nanfu Wang made a short film for The Guardian to accompany their story about Wang Yu.

There are several scenes in our film that touch on human rights directly. 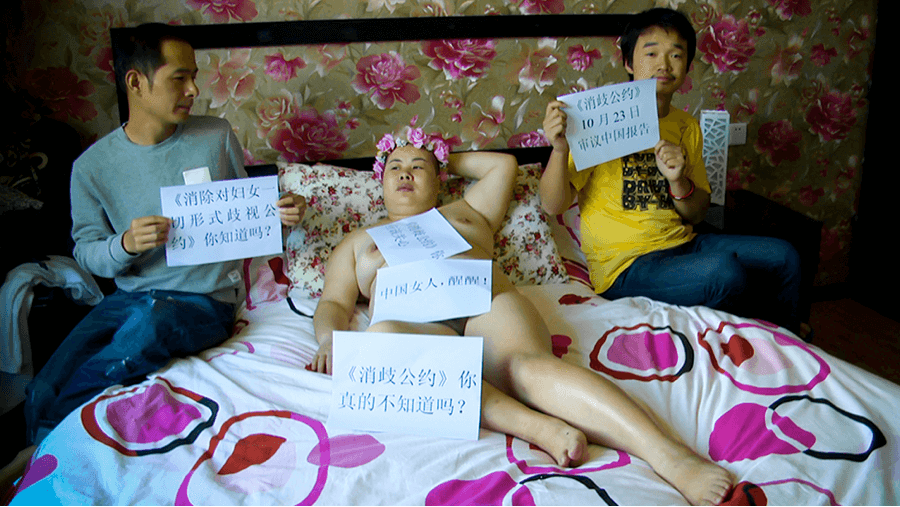 In a hotel room, Sparrow (middle) holds up signs with two other activists. After posting this picture on the Internet, Sparrow was detained for 10 days for “intentionally displaying nudity in a public place”.

This was staged on the annual day of recognition for CEDAW, the United Nations Convention on the Elimination of all Forms of Discrimination Against Women. China has ratified the CEDAW convention and they are legally bound to put its provisions into practice. They also have to submit national reports, at least every four years, on measures they have taken to comply with the treaty obligations. To read more about CEDAW, click here.

It is slightly ironic considering our film that one of the most important UN international conferences on the status of women and human rights was held in Beijing in 1995. To read more about this historic occasion, the Beijing Platform of Action, and the major reviews of countries implementation, click here. 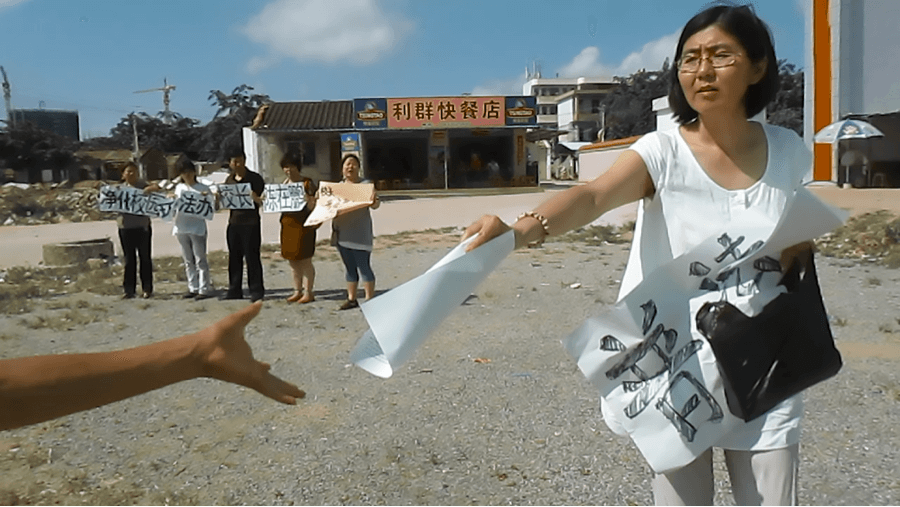 During the protest in front of Wanning No.2 Elementary School in Hainan Provinc, lawyer Wang Yu is shown handing out the UN Convention on the Rights of the Child (CRC).

The CRC is the most accepted and ratified international convention among all UN treaties and remains the most holistic guide for the protection of all children under the age of 18. China is party to the Convention and is bound by its articles and is obligated to submit reports to the UN on the status of upholding the CRC. Read more about human rights for children and the CRC here. 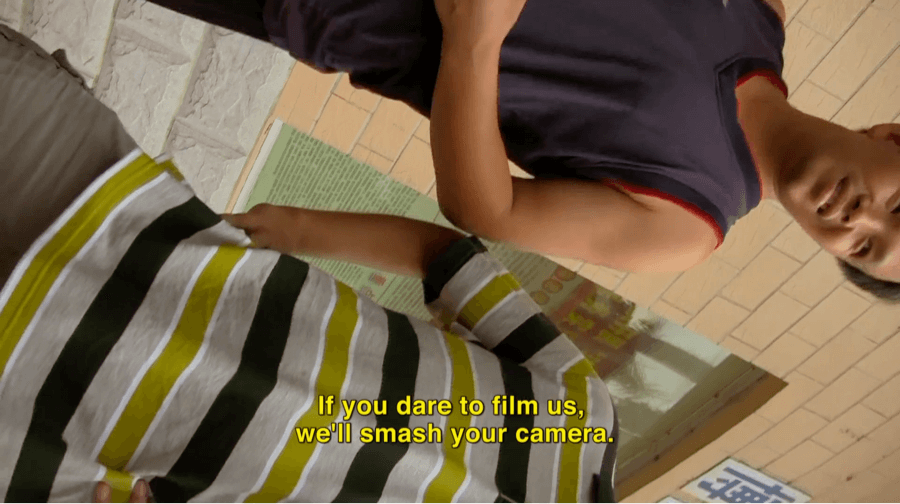 There are scenes in the film where security agents harass filmmaker Nanfu Wang. Her camera is taken and broken, and she is also interrogated.

Article 27 states that everyone has the right to participate in the cultural life of the community, to enjoy the arts and to share in scientific advancement and its benefits. In terms of media, this means that everyone has the right to technology, open source software, the circuits of social media, and even and the tools of documentary filmmaking. To read more about the UDHR, click here.

We also recommend an excellent and comprehensive site for understanding the different conceptual categories for human rights and their direct links to international treaties: The Peoples Movement for Human Rights Learning.

Be an Advocate. While Chinese women’s rights activists’ voices are being silenced and their bodies detained, you can voice the need to address gender inequality and the violation of women’s human rights. Follow this guide from the Nobel Women’s Initiative to be a champion for women’s rights globally.

Free the 20 Campaign. Use the hash tag #freethe20 in your social media posts, this campaign by the U.S. government is drawing attention and awareness to the 20 women’s rights activists imprisoned around the world. One of the 20 is Chinese human rights lawyer, Wang Yu, as seen in Hooligan Sparrow. Watch or read the transcript of Samantha Powers’ speech at the FreeThe20 Women Political Prisoners and Prisoners of Concern Campaign Launch.

Amnesty International Write for Rights. Every year Amnesty International selects twelve cases of human rights violations against prisoners of conscience and through the Write for Rights campaign, organizes participants to write letters, emails, etc. on behalf of these prisoners to the respective government officials to increase pressure for the demand of their release. Hundreds of thousands of members participate and send millions of letters each year. The program has proven to be successful.

Contact Your Representative. Several NGOs listed above in our Stay Informed section have action plans. But for political prisoners in China, perhaps the best thing to do is to raise awareness of the issues with the highest level of government. Writing your political leaders is a crucial step. Letters to congress can keep officials informed and can lead to political pressure to release prisoners. Writing Secretary of Sate John Kerry is also an important choice since he interacts at the highest level with Chinese authorities. For a guide on how to find your representatives, how to write them, how to locate sample letters, we suggest you consult the Electronic Frontier Foundation and their digital platform for defending human rights by writing to your representatives.

Read more about Wang Yu’s case in the press